Caption: Third place in the 2021 IAU OAE Astrophotography Contest, category Wide star fields. This rich panoramic image shows a range of constellations, deep sky objects and planets. The brightest point of light with a pale reddish hue (left of center) is the planet Mars. In the bottom far left of the image, located just above the sloped roof of the building are two points of light appearing very close to each other, these are the planets Jupiter (brighter) and Saturn. To the far right of the image the two fuzzy cloud-like objects are the Large and Small Magellanic Clouds. These are satellite dwarf galaxies of the Milky Way located at a distance of approximately 160,000 and 200,000 light years, respectively. The Andromeda Galaxy, which is located at an approximate distance of 2.5 million light years, appears in this image as a small, angled smudge between Mars and the brightest glow on the horizon (closer to the horizon). The bright glow is not from the Sun or the Moon, but the city lights of San Pedro de Atacama. Prominent constellations include: Orion – identified by the three stars forming Orion’s Belt; Taurus – a small triangle shaped collection of stars to the left of Orion and identified by the pale orange star (Aldebaran) at the vertex of the triangle; Canis Major – to the bottom right of Orion, identified by the bright star Sirius (the brightest star in the night sky) and three stars in the shape of a triangle just above the observatory dome in the foreground; Pegasus – identified by the trapezium shape diagonally below Mars. Other constellations include Andromeda, Perseus and Aries. Diverse cultures around the world have their own names and rich stories associated with these constellations and many others. To the top right of Orion’s Belt is an angled line of stars (Orion’s Sword) within which is a pinkish smudge (looks like a fuzzy star when observed with the unaided eye) that is the Orion Nebula – a stellar nursery located 1500 light years from Earth – where stars are formed. To the left of Taurus is a compact fuzzy smudge, and that is the Pleiades star cluster. The variation in the colour of stars is the result of temperature of the stars, for example, the red orange star to the bottom left of Orion’s Belt is the red giant star Betelgeuse. Cooler stars appear redder, compared to the higher temperature white and bluish stars. The colours in the image are enhanced because of the higher sensitivity of the digital camera compared to the human eye.
Credit: Robert Barsa/IAU OAE
License: CC-BY-4.0 Creative Comments Attribution 4.0 International (CC BY 4.0) icons 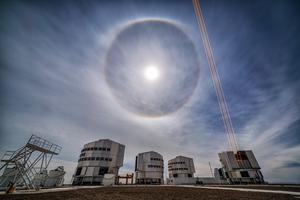 Caption: The Very Large Telescope on Cerro Paranal in Chile has four reflecting telescopes each with a primary mirror 8.2m across. In this image one dome is open and firing laser beams into the sky. These lasers create artificial stars in the sky that can be used to adjust the telescope optics to remove the blurring effect of the Earth's atmosphere. This process is known as adaptive optics. In the sky the Moon is surrounded by a bright halo. This is caused by light from the moon reflecting inside ice crystals in the Earth's atmosphere.
Credit: Juan Carlos Muñoz-Mateos/ESO
License: CC-BY-4.0 Creative Comments Attribution 4.0 International (CC BY 4.0) icons 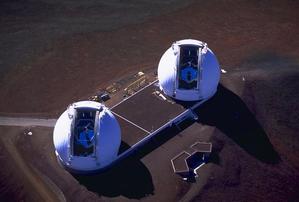 Caption: The NASA/ESA Hubble Space Telescope orbiting Earth. This picture was taken by astronauts on board the space shuttle Columbia, right after the Servicing Mission 3B to the space telescope itself. The telescope has an opening that allows light in (seen here on the left). The light travels through the telescope optics to the cameras and spectrographs located in the bulge at the other end of the observatory (seen here on the right). Data from these instruments is then sent back to Earth using an antenna. The black rectangles on either side of the observatory are the solar panels that provide it with power.
Credit: NASA/ESA credit link
License: CC-BY-4.0 Creative Comments Attribution 4.0 International (CC BY 4.0) icons 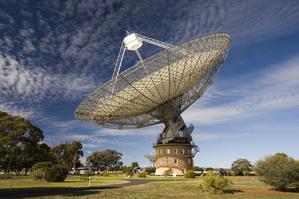 Caption: The 64m Radio Telescope at Parkes Observatory (New South Wales, Australia) is fully operantional since 1963 and continuously upgraded since. Also called "The Dish", it is run by the Commonwealth Scientific and Industrial Research Organisation (CSIRO). The telescope can be pointed at a part of the sky. The radio waves from this part of the sky are then reflected and focussed by the giant dish to a receiver at the focal point. The data from this receiver can then be analysed by astronomers.
Credit: David McClenaghan/CSIRO credit link
License: CC-BY-3.0 Creative Comments Attribution 3.0 Unported icons