Description: When a cosmic gas cloud collapses to form a star, that nascent star is surrounded by a swirling disk of gas and dust. This is a protoplanetary disk, where planets form: ice-covered dust particles will stick to each other, forming slightly larger clumps, which will continue to grow. There are still open questions about how the next stages happen: what, for instance, is the role of turbulent gas motion in bringing those clumps closer together? Eventually, so-called planetesimals more than about a kilometer in size are formed. Some of those are pulled together by their own gravity to form larger planets, others remain behind as the first asteroids. Some protoplanets manage to draw large amounts of gas towards them to become gas giants. Some other protoplanets in cold regions far from the central star will accrete large amounts of frozen material along with gas becoming ice giants. Others, with less gas, become terrestrial planets. 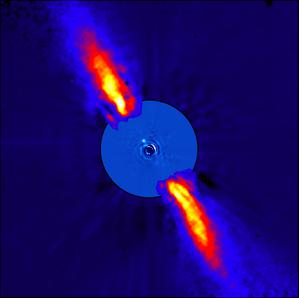 Caption: This composite of two images shows the planet beta Pictoris b and a disk of material both of which orbit the young star beta Pictoris. Both are taken in infrared light. The inner image was one of the first pictures taken of a planet around another star (an exoplanet). This image was made using a technique called adaptive optics which removes the blurring effect of the Earth's atmosphere that spreads out a star's light. The star's light is then concentrated tightly enough that it can be hidden behind a blocking circle (shown here in black) called a coronagraph. The ripples around this are artifacts of the imaging process. Beta Pictoris b, a gas giant planet about twelve times the mass of Jupiter, appears as a dot above and to the left of the black circle. The outer image shows the thermal emission from the warm disk of material surrounding the young star beta Pictoris. As we are viewing this disk edge-on it appears as a line. This disk of gas and dust provided the material to form beta Pictoris b.
Credit: ESO/A.-M. Lagrange et al. credit link
License: CC-BY-4.0 Creative Comments Attribution 4.0 International (CC BY 4.0) icons 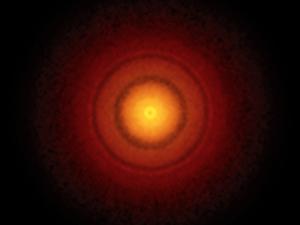 Caption: This image shows the disk around the young star TW Hydrae. This star is only about 10 million years old, young enough that planets are still forming in a disk of gas and dust around it. This image was created using an array of submillimetre telescopes, each of which looks like a satellite dish. When the signals from these telescopes were combined by a central processing computer to make this image. The lighter and darker patches show areas of the disk where there is more or less dust respectively. The dark rings and bright rings are evidence that the dust in the disk has been shepherded into some orbits and away from others. This is likely because there is one or more planets that are still forming hidden in the disk. The whole image shows the disk around TW Hydrae out to a distance of about 70 astronomical units frm the central star. The two outer dark rings are separated from the central star by approximately the average distance between the Sun and Uranus and the average distance between the Sun and Pluto. The inner central hole appears to have been carved out by a planet orbiting TW Hydrae at a distance similar to the distance between the Earth and the Sun.
Credit: S. Andrews (Harvard-Smithsonian CfA); B. Saxton (NRAO/AUI/NSF); ALMA (ESO/NAOJ/NRAO) credit link
License: CC-BY-4.0 Creative Comments Attribution 4.0 International (CC BY 4.0) icons