Description: A protostar is a large mass formed as a result of the contraction of the gas of a giant molecular cloud in the interstellar medium. The protostar is an early stage of star formation. This phase may take anywhere from 10⁵ to 10⁷ years, depending on the mass of the star. It begins with an increase in density in the molecular cloud core and ends with the formation of the T-Tauri star, which will later evolve into the main sequence star. 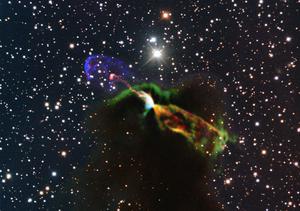 Witnessing the birth of a star 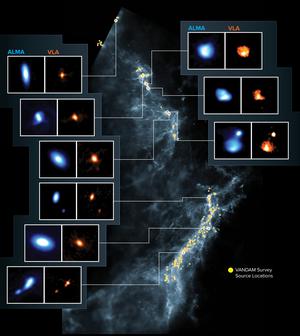 Caption: Snapshot of the formation of multiple protostars in the Orion Molecular Clouds with a closer look at each of them with the Atacama Large Millimeter/submillimeter Array and Very Large Array. Such an image provides unique insights of the process and early stages of star formation as well as the influence of the parent cloud in which they form.
Credit: ALMA (ESO/NAOJ/NRAO), J. Tobin; NRAO/AUI/NSF, S. Dagnello; Herschel/ESA credit link
License: CC-BY-3.0 Creative Comments Attribution 3.0 Unported icons