Description: An artificial satellite is a human-made machine that is sent into space, to orbit Earth or other space objects, where gravity keeps it in orbit to perform various tasks. These tasks can include taking aerial photographs of Earth that help meteorologists predict the weather, or taking pictures of astronomical bodies and distant galaxies, which helps scientists to better understand the cosmic system. Artificial satellites are also used primarily for communications around the world, e.g. more than 20 satellites are used to form a Global Positioning System (GPS). The first artificial satellite was launched into space in 1957 by the Soviet Union, and it was called Sputnik 1. 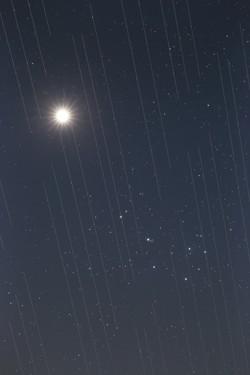 Caption: Third place in the 2021 IAU OAE Astrophotography Contest, category Light pollution. This image of Venus and the Pleiades also shows the tracks of the Starlink satellites. These satellites which are located at an altitude of approximately 550 kilometres, are part of an ever-growing constellation of satellites aimed to provide worldwide internet access. The reflective surfaces of the satellites, coupled with the fact that they are orbiting around the Earth, means that astronomical observations which require very long exposures capture “tracks” of the satellites in their images. Astronomical images used for scientific research are not usable because the measurements and data will contain these “tracks”. Because the number of satellites is expected to grow, it is likely that in the near future there will be no place on Earth where these satellites will not be visible crossing the sky. This is a new type of light pollution that seems to be an upcoming problem we will have to deal with, as these satellites might prevent optimal observation of the sky.
Credit: Torsten Hansen/IAU OAE
License: CC-BY-4.0 Creative Comments Attribution 4.0 International (CC BY 4.0) icons