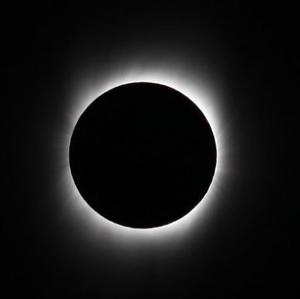 Caption: This image represents the total solar eclipse as observed from Kurigram in Bangladesh. Solar eclipses occur when the moon, as seen from earth, passes in front of the Sun. The moon is much smaller than the Sun, it is closer by the night amount that the angular diameters of the Sun and moon are almost the same (~approximately 1/2 a fingertip). Therefore, the moon can cover up the Sun's disk when it passes directly between the Sun and the Earth. The ring of light around the black circle is called the corona.
Credit: Lutfar Rahman Nirjhar credit link
License: CC-BY-3.0 Creative Comments Attribution 3.0 Unported icons