Description: A solar flare is a brief brightening on one part of the Sun. The Sun is surrounded by lines of magnetic fields, tightly wound and bundled up like coiled springs. Sometimes these lines detach and send huge waves of charged particles into space. These accelerated particles emit light and add to the Sun's brightness, Most solar flares change the brightness of the Sun by amounts barely noticeable to the human eye and can only be seen by solar telescopes or by space telescopes monitoring the Sun. The accelerated particles add to the solar wind, with the largest flares sending waves of particles large enough to interfere with satellites or, for the most extreme cases, electrical equipment on Earth. Other stars also have flares but, as we see the stars as points of light, we only see this as a brief brightening of the star. 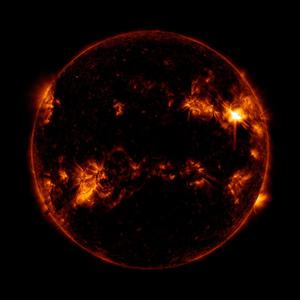 Caption: This image shows the mid-level solar flare that was observed in March 2022 by the Solar Dynamic Observatory (SDO). The SDO observes the Sun activity, hence it shows the regions on the Sun where there is activity. A solar flare is brief brightening on the sun's surface, this particular flare is an M-class, which means that it is a tenth of the size of the most intense flares, namely the X-flares. Solar flares are barely visible with the naked eye, thus the SDO. The image here, is captured in extreme ultravoilet light that was colourized by red in the SDO, the flare appears in the upper of the solar disk.
Credit: NASA/SDO credit link
License: PD Public Domain icons