Description: A space station is a spacecraft on a fixed or nearly fixed orbit that provides a long-term home for humans in space. Specifically, it provides suitable living conditions, from breathable air to well-regulated temperature. All space stations so far have been dependent on regular deliveries of food and water. So far, space stations are or have been in low Earth orbits, with the International Space Station orbiting around 420 kilometers above sea level. As an orbiting station is in free fall, astronauts and equipment inside are virtually weightless. Space stations are primarily used for research, notably on the conditions of weightlessness on human beings; an important preparation for further stages of space exploration. 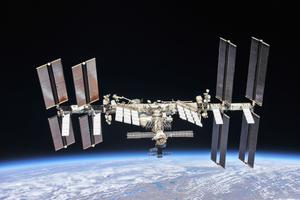 Caption: The International Space Station (ISS) is in orbit around the Earth. Different crews with personnel from many countries have been working there constantly since 2000. The ISS is a laboratory that provides a microgravity environment for experiments in engineering, science, and medicine. The entire structure is more than 100 metres long and flies at an altitude of approximately 400 kilometres above ground.
Credit: NASA credit link
License: PD Public Domain icons