Description: A star is a ball of gas (more precisely, plasma) that is held together by its own gravity and prevented from collapse by inner pressure that is the consequence of nuclear fusion processes in the star's core. The star closest to Earth is the Sun. In a more general sense, the word is also used for stellar remnants such as neutron stars or white dwarfs, which are two possibilities (depending on mass) for what stars turn into once they have exhausted the fuel for their nuclear fusion. Stars are among the most obvious objects in the night sky. In the cosmos, they are typically found within galaxies, each star generally accompanied by one or more planets. The study of how stars form and evolve is an important part of astrophysics. 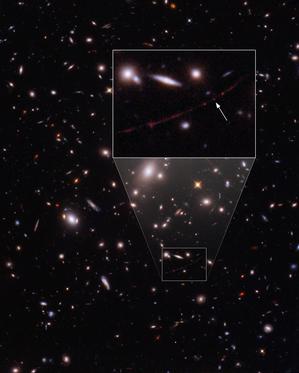 A gravitational lens magnifies one of the first stars

Caption: This image zooms in on a star formed within the first billion years after the birth of the Universe (at a redshift of 6.2). The Hubble Space Telescope detected this light using a technique called gravitational lensing. A massive galaxy cluster between the observer and the imaged star creates a distorted and warped image of the parent galaxy and reveals its features.
Credit: NASA, ESA, B. Welch (JHU), D. Coe (STScI), A. Pagan (STScI) credit link
License: CC-BY-4.0 Creative Comments Attribution 4.0 International (CC BY 4.0) icons