Description: A supernova is a massive stellar explosion. Supernovae briefly become by far the most luminous object in their galaxy before fading over the course of a few years. There are two main pathways that lead to supernovae. The first (Type Ia) involves a white dwarf accreting matter from a binary companion star. Once the white dwarf is destabilized, either by achieving a mass of over 1.4 solar masses (known as the Chandrasekhar limit) or by accumulating enough helium on its surface, it explodes, leaving no remnant. The other main pathway that forms a supernova (Type II) is the evolution of a star with a mass greater than 8 solar masses. At the end of such a star's evolution it explodes, resulting in a neutron star or (for the most massive stars) a stellar-mass black hole. Supernovae are the source of many of the chemical elements, especially those heavier than magnesium. 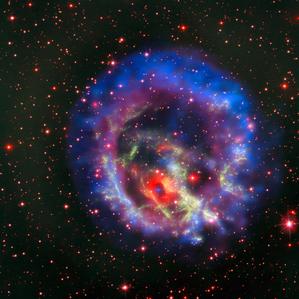 Death of a massive star

Caption: A multi-wavelength image taken with telescopes on the Earth and in space of a neutron star within our neighbouring Small Magellanic Cloud galaxy. A neutron star (seen here as the blue spot surrounded by a red ring) is the final product of gravitational collapse, compression and explosion of a massive star, left embedded in its supernova remnant (in green).
Credit: ESO/NASA, ESA and the Hubble Heritage Team (STScI/AURA)/F. Vogt et al. credit link
License: CC-BY-4.0 Creative Comments Attribution 4.0 International (CC BY 4.0) icons