Description: The stars which do not set anytime as seen from a given location are called "circumpolar stars" or "never setting stars" for that location. Due to Earth's rotation, we see all stars trace a circle in the sky each day, with the apparent center along Earth's axis. For any stars close to the visible celestial pole, their entire traced circle would be above the horizon of the observer. Hence the stars would never set. If the declination of a star is more than 90-latitude deg. (for southern hemisphere – declination less than 90+latitude deg., where southern latitudes are taken as negative numbers), then that star would be circumpolar for that latitude.

Stone Star Circles, Startrails above Stonehenge, by Till Credner, Germany

Caption: Second place in the IAU OAE Astrophotography Contest, category Star trails. Astronomy is one of the oldest (if not the oldest) of the sciences, and as such has connection to various cultures over millennia. This image in a way conveys this relationship by being contextualised in Stonehenge. There is much research into what astronomers call archeoastronomy sites, and how they connect to the sky (for example, seasons, phases of the moon and much more). Civilizations across time and from all over the world have their own views and interpretations of what they see in the sky, and this has been tied not only to culture but also to the people’s day-to-day and seasonal activities. The “concentric circles” which are often referred to as “star trails”, are the result of the apparent motion of the sky, which is in reality due to the rotation of the Earth on its axis. The small dot appearing towards the top center of the image is Polaris – The North or Pole Star. Polaris is only visible to observers in the Northern latitudes. The height of the Pole Star can be used to infer the observer’s actual latitude. Stonehenge is located at around 51° North. This image is taken from one of the most notable ancient sites in the world, brings us back in time, and makes us wonder about the stories told by the people that lived in that place many millennia ago.
Credit: Till Credner/IAU OAE
License: CC-BY-4.0 Creative Comments Attribution 4.0 International (CC BY 4.0) icons 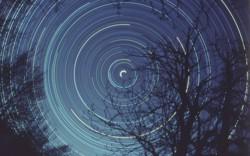 Half day exposure to the north star, by Fabrizio Melandri, Italy

Caption: First place in the IAU OAE Astrophotography Contest, category Star trails. This star trail image shows the apparent movement of the stars in the night sky, which results from the Earth’s rotation around its polar axis. The trees in the foreground serve as an anchor as we turn with the Earth. The bright white semi-circle in the center of the image is the North (Pole) star – Polaris, which is located very close to the North Celestial Pole. One way to imagine that the Earth is at center of hollow crystal sphere, and the stars are embedded on this sphere, as the Earth spins on its axis, an observer on Earth sees the stars rising and setting, following an arc, because the horizon prevents the observer from the full arc for stars that are further away from the Celestial Pole. The North Celestial Pole (and its opposite the South Celestial Pole) is essentially formed by extending the line of the Earth’s axis. Capturing this image requires the photographer to take a long exposure with the camera on a tripod and pointing towards the Pole Star (North Hemisphere). In the Southern Hemisphere there is no star as close as Polaris is to the Celestial Pole, so the position of the South Celestial Pole is found using the South Cross and Pointer Stars (Alpha and Beta Centauri). Although overall the image has a slight blue tint, it does capture the varying colours of stars, it is easy to distinguish between the higher temperature blue stars and the lower temperature of the whitish stars, and even lower temperature reddish stars. The reason for this variation in colour is because higher temperature stars emit more in shorter wavelengths (bluer), compared to lower temperature stars which emit in longer wavelengths (redder).
Credit: Fabrizio Melandri/IAU OAE
License: CC-BY-4.0 Creative Comments Attribution 4.0 International (CC BY 4.0) icons