Description: The cosmic microwave background (CMB) is the relic electromagnetic radiation from when the Universe was about 380,000 years old. It provides information about the Universe’s composition, geometry (shape), evolution, and development of structure over 14 billion years. The early dense Universe, consisted of a "hot soup" of free particles (protons, neutrons, electrons) and light (photons). The interaction of photons with free electrons prevented light from traveling long distances. The expansion and cooling of the Universe allowed free electrons to combine with protons to form atomic hydrogen, and allowed light to travel through the Universe. The expansion also stretched the wavelength of these photons, making them detectable in the microwave region of the electromagnetic spectrum. 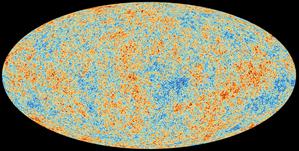 Caption: This image is a representation of the Cosmic Microwave Background (CMB) Radiation created using data from the Planck satellite. The CMB is the glow left over from when the Universe was approximately 380,000 years old. The early Universe was hot and dense, so the photons from that era were high energy. Due to the expansion of the Universe over 13.8 billion years photons of ""light"" from the early Universe have been stretched to longer wavelengths and are detectable in millimetre wavelengths (microwave region of the electromagnetic spectrum). The ""mottled"" pattern in the image is referred to as anisotropies, and it represents very small temperature fluctuations. These fluctuations correspond to regions of slightly different densities, and are essentially the seeds for larger structure in the Universe e.g.: galaxies, galaxy clusters, and the very first stars. The data from the CMB allows various characteristics of the Universe to be derived, for example, composition, shape, age, and allows for certain predictions to be made about the future evolution of the Universe. The shape of the image is the result of a mapping projection, where the entire sky is mapped onto a single flat oval shape called Molleweide projection. The center of the Milky Way galaxy is located at the centre of the image.
Credit: ESA/Planck Collaboration credit link
License: CC-BY-SA-4.0 Creative Comments Attribution-ShareAlike 4.0 International (CC BY-SA 4.0) icons