The IAU has selected Haus der Astronomie (HdA) as the location for its new Office of Astronomy for Education (OAE). First announced last year, the OAE will be established to promote astronomy in education and to achieve the education-related goals set out in the IAU Strategic Plan 2020–2030. The astronomy outreach centre will capitalise on its existing resources and experience to launch the IAU Office of Astronomy for Education, co-funded by the Klaus Tschira Foundation and the Carl Zeiss Foundation.

The International Astronomical Union’s Strategic Plan 2020–2030 provides for the establishment of an Office of Astronomy for Education (OAE), which will support the astronomy community and astronomy educators in bringing the fascination of astronomy into schools. Its activities will include establishing a worldwide network of National Astronomy Education Coordinators (NAECs), promoting astronomy in national curricula, supporting teachers with evidence-based education research and helping the community with its professional development. The OAE is also intended to facilitate discussion and knowledge sharing within the community, particularly between astronomy education researchers and astronomy education practitioners.

In response to the IAU call aimed at international institutions interested in hosting the new OAE, the IAU received 23 Letters of Intent, which were subject to an initial evaluation. Nine proposers were then invited to submit a full proposal — from Australia, China, France, Germany, India, Italy, Netherlands, USA. By the deadline, six proposals were received, which were evaluated and ranked independently by each ad-hoc evaluation committee member, and then discussed and merged into a final ranking. This committee has now concluded the evaluation and ranking of the six proposals received, and a very clear winner emerged, which subsequently also received the unanimous approval of the IAU Executive Committee: Haus der Astronomie (HdA) in Heidelberg.

Haus der Astronomie has been actively engaging the public in astronomy since 2009 by delivering workshops for students, creating teaching materials and holding public events, and a variety of other activities. With close ties and past collaborations with numerous international institutions engaged in astronomy education, it is well placed to help coordinate astronomy education activities on an international level. HdA was founded by the Max Planck Society and the Klaus Tschira Foundation. Additional partners are the city of Heidelberg and Heidelberg University. HdA is managed by the Max Planck Institute for Astronomy.

HdA’s alignment with the mission of the OAE makes it an advantageous setting for establishing the OAE, which will benefit from the relevant backgrounds and experience of the HdA staff. Additional dedicated staff will also be required to undertake the new activities, leading to new job opportunities. The new OAE will undertake its activities in close collaboration with the IAU’s Office of Astronomy for Development (OAD) and Office for Astronomy Outreach (OAO) as well as with numerous education projects that are already active in the community.

Markus Pössel, managing scientist of Haus der Astronomy and the director designate of the new OAE says: “Good education in the STEM subjects, including astronomy, is becoming ever more important. With the founding of the Office of Astronomy for Education, there are exciting times ahead for Haus der Astronomie, and we are grateful to the IAU and to our funders and supporters for this opportunity.“

“We are delighted to fund such an international flagship project for astronomy. By funding an Education Research Coordinator, we hope to promote astronomy education and to bolster the position of Germany in this field” explains Theresia Bauer, Chairwoman of the Carl Zeiss Foundation Administration.

“By supporting the Office of Astronomy for Education, we will continue to promote the fascination of astronomy to the younger generation — just what our foundation is keen to achieve” says Beate Spiegel, Managing Director of the Klaus Tschira Foundation.

The opening of the Office of Astronomy for Education, the opportunities it affords for more intensive international collaboration on astronomy education, and feedback from the astronomy education community on the OAE’s strategy and plans for implementation will be the discussion topic of the 1st Shaw-IAU Workshop on Astronomy for Education, which takes place on 17–19 December 2019 at the IAU Headquartes the Institut d’Astrophysique de Paris (IAP), which is the first of a series of such workshops, funded by the Shaw Prize Foundation.

IAU General Secretary Teresa Lago says: “At the 1st Shaw-IAU Workshop on ‘Astronomy for Education’ we will be sharing ideas, ambitions, experiences and practices, but also laying a solid foundation for a global collaborative network through a broad and inclusive IAU Office of Astronomy for Education”.

A formal agreement between the IAU and the Max Planck Institute for Astronomy for the establishment of the Office of Astronomy for Education is about to be signed.

The International Astronomical Union
The IAU is the international astronomical organisation that brings together more than 13 500 professional astronomers from more than 100 countries worldwide. Its mission is to promote and safeguard astronomy in all its aspects, including research, communication, education and development, through international cooperation. The IAU also serves as the internationally recognised authority for assigning designations to celestial bodies and the surface features on them. Founded in 1919, the IAU is the world's largest professional body for astronomers.

Haus der Astronomie (HdA)
Founded as a centre for astronomy education and outreach, the mission of Haus der Astronomie is to demonstrate to the public in general, and to young people in particular, the fascination of astronomy, and to further the communication between astronomers and their colleagues in other scientific disciplines. HdA was founded by the Max Planck Society and the Klaus Tschira Foundation in 2008. Additional partners are the City of Heidelberg and Heidelberg University. HdA is operated by the Max Planck Society, which has delegated that task to the Max Planck Institute for Astronomy (MPIA).

The Klaus Tschira Foundation
The German foundation Klaus Tschira Stiftung supports natural sciences, mathematics and computer science and the appreciation of these subjects. It was founded in 1995 by physicist and SAP co-founder Klaus Tschira (1940–2015) by private means. Its three priorities are education, research, and science communication. This commitment begins in kindergarten and continues in schools, universities and research institutions throughout Germany. The foundation also advocates the dialogue between science and society.

The Carl Zeiss Foundation
The Carl Zeiss Foundation’s mission is to create an open environment for scientific breakthroughs. As a partner of excellence in science, it supports basic research as well as applied sciences in the STEM subject areas (mathematics, information technology, natural sciences and technical disciplines). Founded in 1889 by the physicist and mathematician Ernst Abbe, the Carl Zeiss Foundation is the oldest private science funding institution in Germany. It is the sole owner of Carl Zeiss AG and SCHOTT AG. Its projects are financed from the dividend distributions of the two foundation companies. 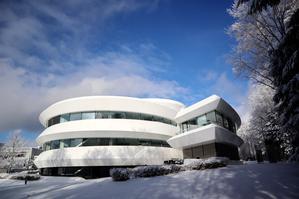