The first STEAM–Med Workshop on Astronomy for Education took place on the island of Lampedusa from 4 to 8 July 2022. This five-day event was for teachers in the Mediterranean area, and was based on the STEAM framework (science, technology, engineering, arts and mathematics). It focused on the use of astronomical topics in primary schools to enhance the study of scientific subjects.

The workshop was coordinated by the IAU Office of Astronomy for Education Center Italy, which is led by the National Institute for Astrophysics (INAF), and it was hosted by the Research Area Structure of Marina di Lampedusa. The island’s unique, central location in the Mediterranean made it the ideal meeting point for all the event participants.

The participants chose light as a unifying theme, and each country proposed an activity to capture a particular aspect of it, such as the nature of light, sunlight, starlight, moonlight, shadows and the principles of optics. The topic was approached not only from the scientific point of view, but also from environmental, kinaesthetic, artistic and narrative perspectives. Each activity was discussed and analysed with the partner countries, in a peer-review process.

“Facilitating the collaboration among such different countries has been extraordinarily interesting, and it was carried out in a particularly simple and straightforward manner,” remarks Stefania Varano, INAF equity, diversity and inclusion officer at the OAE Center Italy. “Astronomy is very effective not only for the interest it arouses, but also for the deep sense of identity and communion it helps to develop.”

STEAM–Med promotes learning in primary schools by mixing scientific and non-scientific disciplines. It emphasises methods which place the pupil at the centre of the growth process, in a relaxed and informal setting. The main components are play and fun, while caring for the learning of the students.

“We think that scientific citizenship is a fundamental element of democracy,” underlines Sara Ricciardi, deputy manager of the OAE Center Italy. “Schools play a vital role in providing children with the basic tools in order to tackle this challenge”.

During the workshop, participants were also involved in public engagement activities. These included reading and interpreting children’s books at the IBBY Library in Lampedusa — which has a collection of silent books for migrant people and children — and a stargazing night with a multi-voice narration of the myths linked to the Mediterranean sky.

The STEAM–Med Workshop is an element of the IAU’s wider initiative to foster the role of astronomy in education through its Office of Astronomy for Education (OAE). OAE Director Markus Pössel of Haus der Astronomie in Heidelberg, Germany, adds: "Astronomy has a considerable power of fascination for all human beings, and in particular for children. This fascination, in turn, is a powerful tool for getting children interested in science, technology, engineering and mathematics (STEM). But it also provides a wider perspective of us as humans on a rather small habitable planet that we really need to preserve for our own sake. It’s great to see these principles put into practice in the course of this workshop!"

STEAM–Med is the first of a series of workshops focusing on the Mediterranean area, promoted by the Office of Astronomy for Education Center Italy, an IAU office coordinated by the National Institute for Astrophysics, and a network of institutes such as Società Astronomica Italiana (Italian Astronomical Society) and the University of Rome, Tor Vergata.

The IAU is the international astronomical organisation that brings together more than 12 000 active professional astronomers from more than 100 countries worldwide. Its mission is to promote and safeguard astronomy in all its aspects, including research, communication, education and development, through international cooperation. The IAU also serves as the internationally recognised authority for assigning designations to celestial bodies and the surface features on them. Founded in 1919, the IAU is the world’s largest professional body for astronomers.

The IAU Office of Astronomy for Education is hosted at Haus der Astronomie (HdA), managed by the Max Planck Institute for Astronomy. The OAE’s mission is to support and coordinate astronomy education by astronomy researchers and educators, aimed at primary or secondary schools worldwide. HdA’s hosting the OAE was made possible through the support of the German foundations Klaus Tschira Stiftung and Carl-Zeiss-Stiftung. 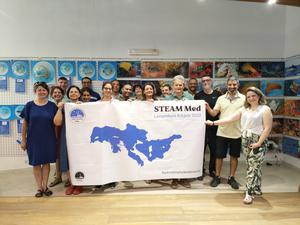