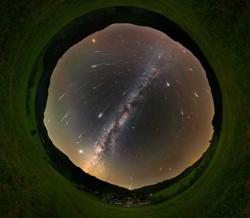 A meteor shower occurs when the debris originated from comets or, on rare occasions, from asteroids enter the Earth’s atmosphere at high speed, leaving behind beautiful tracks in the sky due to friction with the atmosphere. This all-sky image taken in Slovakia in 2020 shows the Perseid meteor shower in a vivid way so one can really see the Perseids appearing all over the sky. This meteor shower is named so because the radiant point (the point on the sky where the meteors misleadingly seem to originate from) of the Perseid meteor shower is located in the constellation Perseus. This is a very prolific meteor shower, and a very popular phenomenon that can be observed from mid-July until mid-August, when the peak of activity happens. This is associated with the comet 109P/Swift–Tuttle, as Earth's orbit around the Sun crosses the debris left behind by this comet. This kind of image is very useful for full dome projections in planetariums, beautifully showing the Milky Way, our home Galaxy.