This page describes a video Under the Stars with Steve, by Sheila Wiwchar, Canada 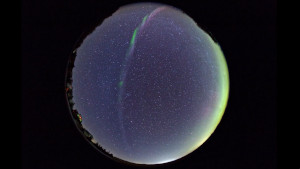 This is a strange atmospheric phenomenon known as Steve. This is similar to an aurora as it is caused by charged particles interacting with the Earth's magnetic field. However unlike aurorae, the particles which cause Steve are generated high in the Earth's atmosphere rather than coming from the Sun. Note the banded "picket fence" appearance. This is caused by waves of these particles in the upper atmosphere. The name Steve was chosen by the first group to describe this phenomenon as a familiar name for something unknown.